She came into the room in a great state of distress and my heart went out to her. “Can you help me? I can’t find my poops.”

“Oh hi, Dakota.” This from Julie Johndreau, who I was visiting.

“I thought I left them with my skulls,” Dakota elaborated. She then realised that there was a stranger present and gave me slightly devastating smile. “I’m sorry – you probably think I’m nuts.”

“Not at all,” I said. “I appreciate the importance of turds.”

So I produced my phone and showed here some photos. Photos of poops, turds, whatever. I had three available for immediate inspection, all from my back-garden and the few acres of marsh that lie beyond. In each I had included my Swiss Army knife, a much photographed object, for scale.

“That’s otter? Amazing, I’ve never seen an otter. And hedgehog, that’s great, I love hedgehogs. And that’s this one?”

Dakota McCoy is a biologist at Badlands National Park, where I made a recent visit to research a piece for Intelligent Life magazine. She specialises in mammals, and that’s enough to give anyone a special relationship with turds.

Two reasons for this. The first is that many mammals are nocturnal and elusive, so you hardly ever see them. You have to rely on the signs they leave behind, and turds are the most easily found of those signs. The second is that most mammals – us primates excepted – have a highly developed sense of smell. They leave these little souvenirs of themselves in strategic players so that others of their kind will know they’ve been that way. It’s a also way of passing on information about territory,

dominance and sexual availability and no doubt a host of other things remote from our understanding.

Turds matter to many species of mammal, and so they matter to anyone who studies them. Dakota is involved with the black-footed ferrets of National Park. This species was declared globally extinct in 1979, but then a remnant population was discovered. Since then a captive-breeding programme has been established, and the ferrets have been reintroduced in selected places, including the park.

So when Dakota finds a black-footed ferret poop, it’s a thing of joy and wonder. Meanwhile, here are the three pics I showed her. 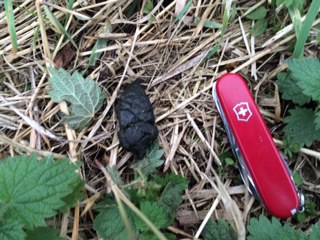 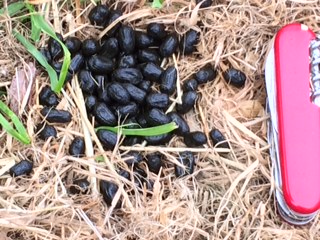 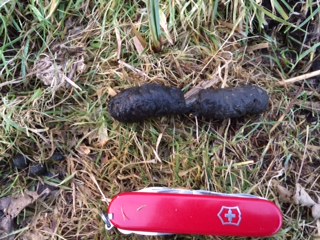