I’ve always wanted to see a buffalo. By that I mean the American bison. But I didn’t know that. It came to me as a bit of a surprise. I was in Badlands National Park, in South Dakota, where I was researching a piece for Intelligent Life magazine.

Here is one of the world’s fantastical landscapes, but landscapes will only get you so far. They don’t come to life until you encounter living things, for they are the spirit of the place. But then I looked out across these impossible towers and edges and turrets and striations and collapses of this extraordinary place and there, on a patch of green prairie in the midst of all this geological mayhem, I saw that unmistakable silhouette.

All head and shoulders. That huge hump. Head down, getting stuck into the sparse grass. And for about a million different reasons at once I felt a great soaring of the heart. It was a bit like seeing a unicorn.

The Badlands was the site of the last cowboy and Indian war; Wounded Knee is just down the road. It’s a place heavy with human as well as natural history. And this distant buffalo silhouette was about all those ancient dramas, as well as being a fine thing in its own right.

Buffalos were reintroduced to Badlands national Park in the 1960s, and there are now 800 or more in the park; they can cope with this notoriously waterless place because of the introduction of stock-dams. Later I was to walk among them: they stroll at their ease through Sage Creek camp site.

This transcendent vision of buffalo was about the adventure of the taming of the West, but also about the latter-day adventure of rewilding the West. They’re one step ahead of Joni: don’t it always seem to go, that you don’t know what you’ve got till it’s almost but not quite gone. 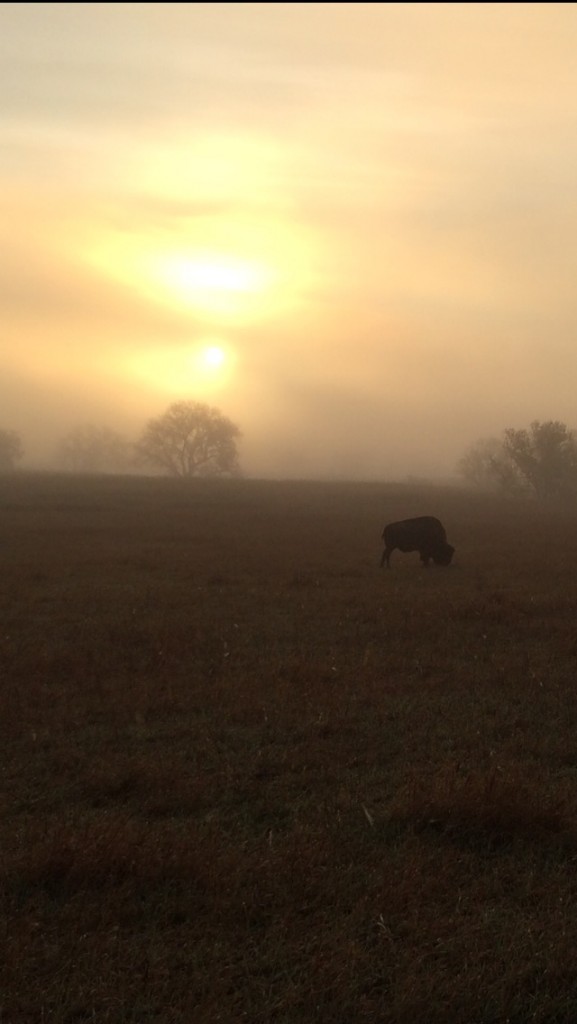