A Journey Through the Entire Animal Kingdom 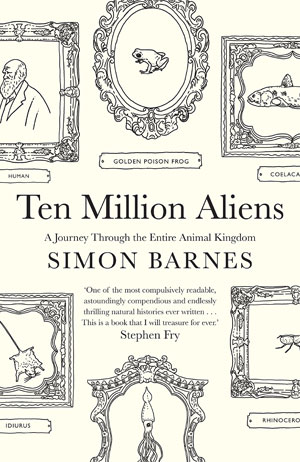 Life on Planet Earth is not weirder than we imagine. It’s weirder than we are capable of imagining. And we’re all in it together: humans, blue whales, rats, birds of paradise, ridiculous numbers of beetles, molluscs the size of a bus, the sexual gladiators of slugs, bdelloid rotifers who haven’t had sex for millions of years and creatures called water bears: you can boil them, freeze them and fire them off into space without killing them. We’re all part of the animal kingdom, appearing in what Darwin called “endless forms most beautiful and most wonderful”.
In this breathtakingly audacious book, Simon Barnes has brought us all together, seeking not what separates us but what unites us. He takes us white-water rafting through the entire animal kingdom in a book that brings in deep layers of arcane knowledge, the works of Darwin and James Joyce, Barnes’s own don’t-try-this-at-home adventures in the wild, David Attenborough and Sherlock Holmes. Ten Million Aliens opens your eyes to the real marvels of the planet we live on.

One of the most compulsively readable, astoundingly compendious and endlessly thrilling natural histories ever written . . .
This is a book that I will treasure for ever.
- Stephen Fry

Reading Barnes's prose is a bit like peeling a rather elegant onion, as he gradually reveals secrets about his life through the medium of the natural world.
- BBC Wildlife Magazine

Barnes has a wonderful knowledge of wildlife and a gift for bringing his enthusiasm to life - He has a deft turn of phrase and a lyrical style.
- Rosie Boycott