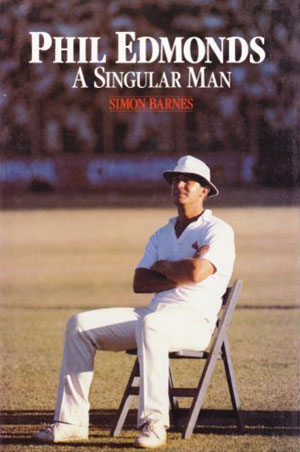 
In this perceptive portrait, Simon Barnes sees Edmonds’ boyhood in Zambia as the key to his character: the relationship his family had with black national leaders, and the resulting social consequences provide rare in site into his future attitudes. From this unusual background he progressed to captaining Cambridge, and it seemed that his effortless transition into county cricket would be just the debut of a highly successful cricketing career.

Phil Edmonds: A Singular Man, is a delightful biography of one of cricket’s most delightful players. intelligent, amusing, aggressive, ridiculously brave, athletic and scornful, Philippe-Henri Edmonds has enriched Test and Country cricket for more than ten years. Simon Barnes. a witty and fair-minded journalist, has chosen as a central pivot for the book Edmond’s awkward personal and professional relationship with Mark Brearley, his test and Country Captain for many years, the ramifications of which are presented in a sane and balanced manner from both points of view.
- Stephen Fry