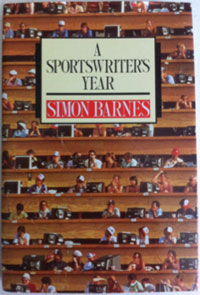 
This book describes life behind the scenes of a sportswriter’s life. When Simon, as The Times then sportswriter he had a roving brief, and his work takes him around the world covering anything from ice-skating to motor racing. His year included the Grand National and three days backstage at Santa Anita racetrack, Los Angeles. He covered the Tyson v Holmes fight and he interviewed Nelson Piquet and a female jockey, Gee Armytage. Cricket is sampled in Barbados, rugby at the Hong Kong Sevens, and power-boat racing in Guernsey, and finally, the Seoul Olympics.
This is not a book about beer drinking (well, not much) or aeroplanes (apart from the time he got upgraded to first class and couldn’t stop boasting about it) It goes deeper than that. Who is the great jazz-man of Wimbledon? Which sport is decadent and depraved? What is it like covering a world heavyweight fight loathing boxing and reeling with flu? Is it safe to have a crush on your interview subject? And what is the difference between being good at sport … and being a winner?