My sister Rachel gave me a kind and funny present for my new writing-hut. It’s a silk-screen print of Withnail affectionately clasping a bottle of plundered Chateau Margaux ’53 (“best of the century”). The joke is that there are two images of Withnail, with two or three ghost-images discernible behind them.

So here is Withnail seen double: “always time for a drink”. Next week it’ll be hanging up to remind me of all those potent themes in the film Withnail and I: the death of adolescence, the death of ideals, the death of friendship and the inevitable victory of time.

So I turned away to look at the marsh, and all at once I was seeing double again. That flicker of white — sometimes distant, sometimes near — has been part of the winter, teaching me to pick out barn owls from the most meagre of clues. I’ve seen them quartering the ground almost every day.

Always a joy, naturally. But then the joy was doubled  — or trebled — or tenfolded. Two barn owls. Two together, as the touts say at Wimbledon.

I’ve also been seeing a marsh harrier most days. Just the one, and always female. One bird, then, or maybe a couple: but always alone, and patrolling the marsh with an easy cruise of those uptilted wings.

Yesterday there was only one harrier to be seen, but as I turned the bins onto the gliding dihedral I saw that it was a male: a new arrival tricked out in shades of chestnut, sable and silver. Here is as lovely a thing as you’ll ever see in this country, and I followed his languid, confident progress across the generous Norfolk sky.

I’m looking forward to the moment when I see two together, and I have the best seat in the house for that moment. But seeing them sequentially rather than simultaneously is almost as good as seeing double. I know they’re both out there.

With both the barn owls and the marsh harriers there is the same sense of impending victory. Two pairs and a great environment. Many things can go wrong, I know, but when I see double I can sense more owls, more harriers and a future. Chin-chin!

As Withnail would say. 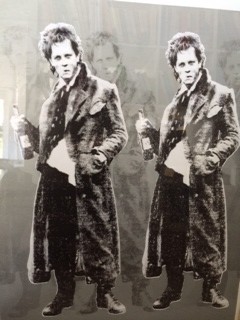