I was stepping out of my hut – the hut I work in at the bottom of the garden, in front of the marsh – when I found a piece of gold. Pure, shining, 24-carat gold, reflecting the generous sun of the day with such enthusiasm it could almost count as a rival.

It was perhaps the size of a fingernail, roughly triangular, and it looked as if it had been freshly painted by Goldfinger, the paint not quite dry. It was an insect – that much was obvious, though that doesn’t narrow the field much, since there are about million known species to choose from. It was standing on a single serrated leaf of the nettles that guard the hut’s entrance, and it looked like a scaled-down version of the amazing Ashanti gold rings that Mitzi Cunliffe used to wear; she was a sculptor and the mother of a former girlfriend, a lady much given to sartorial drama. Her giant golden insects caught the eye and held it.

My own living insect offered quiet drama of a different kind, played out to an audience of one, as if often the way: the piece of gold among the stingers promising unimaginable wealth as I returned to the house for a cup of tea.

I took a photo but to my disappointment, the golden moment was lost in the pedantry of reproduction. Perhaps some weird effect of reflected light created an illusion that the lens couldn’t catch: I had instead the image of a handsome, well-marked creature with long antennae: a fine thing but lacking the magic of the unexpected encounter.

I sent the picture to Matt Shardlow, who is CEO of Buglife, the excellent charity for invertebrates, a most important organisation to support. Matt told me it was a longhorn moth: the males have truly prodigious antennae, and will at this time of the year form groups and dance together in the sun.

The accurate information and the equally accurate picture didn’t spoil the earlier experience. Fact and fancy can live side by side very comfortably. I will know the moth next time I meet one, and I will also treasure the memory of Ashanti gold basking among the nettles. 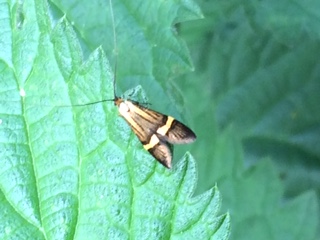