We usually listen to birdsong in one of two ways, and both are wrong. Well, not wrong as in incorrect or morally unsound, but they’re both superficial: more a way of evading the issue than getting closer.

The first is to listen and say, ah, there’s a bird singing, splendid. Which is fair enough, but it’s like listening to a burst of music and saying, ah yes, I know what that is, it’s music. It’s possible to go a bit deeper.

The second — and all birders are guilty of this, including me — is to use the song to diagnose the species singing it – and leave it at that. Ah yes, blackcap, jolly good, carry on, keep it up, I wonder what’ll turn up next.

I used not to rate this song so terribly high, but out on the marsh they rather demand the attention. They don’t stand out against nightingales and bitterns, but they are — in their understated way — virtuosos.

Scientific analysis of their sonagrams – a graphic representation of sound — has shown that they will sing for a full minute at a time without pause, and in that time they will utter around 300 syllables. The song peaks in the middle, at point of maximum complexity, when they introduce up to ten new syllables, before fading back down again. It’s been suggested that the song and its production are so complicated that the bird never sings the same song twice over.

So I sipped my tea and drank song.

Today is Bloomsday, as all Joyceans know – that day on which the fictional events of Ulysses are set. Joyce was never much of a naturalist, though even in this, the ultimate towny book, there are brief and lovely evocations of the sea.

One reason for this omission is certainly Joyce’s poor eyesight. He was desperately short-sighted even as a child and his later life was plagued by a series of horrific operations on his eyes. His evocation of Dublin evokes sounds as much as sights.

So he’d never have been able to focus on a bird. But I wonder what Joyce would have written had he been taught a few birdsongs. He is always hyper-ware of sound: and music echoes thr length and breadth of Ulysses. Here’s a passage from Stephen’s walk along the beach: “Listen: a fourworded wavespeech: seesoo, hrss, rsseis, oos. Vehement breath of waters amid seasnakes, rearing horses, rocks. In cups of rocks it slops: flop, slop, slap; bounded in barrels. And, spent, its speech ceases. It flows purling, widely flowing, floating foampool, flower unfurling.”

In the next chapters a cat calls: mkgnao! And then: mrkgnao! And later in the book, the Sirens chapter is all music. It’s written, Joyce explained, in the form of a fugue, beginning with a spectacular and initially baffling overture.

What would Joyce have written of the dawn chorus at Minsmere bird reserve in Suffolk? Or of the first sounds heard in Phoenix Park, Dublin at dawn on June 16 1904?

The swallows are getting serious. They arrived and met some iffy weather, so they’ve mostly been messing about in front of the stables they nest in. But now they are getting stuck in: performing frenzied aerobatics as the two pairs sort out who will have which end of the block and who will defer to whom.

There’s a lot of close formation flying, and a lot of exuberant twittering, as Eddie saw on his bike-ride today. The swallow is not in the

first rank of music-makers, but its cheerful babble is very pleasing: and more so because it comes from the sky.

So a song on the move is rather splendidly appropriate. And then that sharp double note that swallows utter in moments of excitement or alarm: and there was a pair of them pursuing a little owl across the meadow, chivvying it back to its lurking-place in an old willow. Would a little owl predate swallow chicks, I wonder?

If so, these swallows have told the owl they’d got its number. And even if not, the chase has reinforced their sense of mutual solidarity as a pair of likely swallows. Now to get on with the job of making more of the same.

Today Dad and I went looking for insects and other small animals in the long grass behind the house.

There was a big brown dragonfly over the pond.

There was a spider with a white body on a log.

The prettiest was a bright blue-green beetle we saw on a buttercup.

Some very small black beetles landed on my yellow school shirt. Dad said they were pollen beetles – they landed on me because they thought my shirt was a huge lump of pollen!

We saw a bumblebee and a peacock butterfly.

We sat still in the sun and I could see that there were insects everywhere we looked. So many!

A lot of little birds eat insects and spiders. If there were no insects there would be no birds. 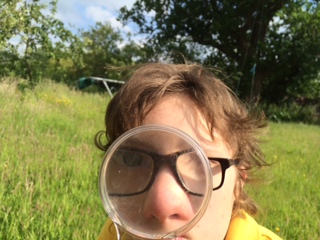